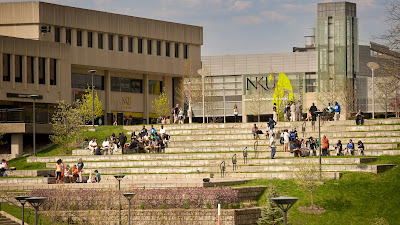 The Northerner | NKU announces the winners of the 2022 Alumni award

The University of Northern Kentucky has announced the recipients of the 2022 Alumni Awards as Nathan Smith, Jakki Haussler, Tracy Schwegmann, H. McGuire (Mac) Riley, John Perpetou Baylosis Jose and Peg Adams. They will be honored at the Alumni Awards dinner on February 4 to kick off Reunion Weekend at NKU.

“The recipients of the Alumni Awards have shown that they have a deep passion for supporting our students and making a positive impact in the community,” said NKU President Ashish Vaidya. “The individuals prove that NKU is a university whose alumni, faculty and staff are focused on the success of our students, both in school and after graduation.”

Nathan Smith (’94) is the recipient of the 2022 Outstanding Alumnus Award for enhancing the image of NKU through its successes and achievements. Smith is Co-Founder and Chief Investment Officer of Flagship Communities REIT. In October 2020, his company announced the formation of a real estate investment trust (REIT) as well as an initial public offering on the Toronto Stock Exchange. The REIT was formed to own and operate a portfolio of 65 prefabricated housing communities, comprising 11,328 lots located in Kentucky, Ohio, Indiana, Tennessee, Missouri, Arkansas and Illinois. Smith’s business is the largest manufactured home company in Kentucky and one of the largest in the Midwest.

Flagship Communities is among the top 20 in the United States with more than 160 employees and 66 communities in seven states. The company operates communities in multiple geographies and Smith is responsible for leading the acquisitions, engineering and zoning of new developments and all marketing, sales and public relations for the $ 584 million company. dollars.

He has served as president of the Manufactured Housing Institute, a professional organization of 915 industry members, and president of the Kentucky Manufactured Housing Institute. In addition, Smith previously served on the board of directors of Safe Harbor Marinas, the world’s largest owner and operator of marinas, and was a member of the board of directors of the Greater Cincinnati Northern Kentucky International Airport.

Smith served as the former Chairman of the University of Northern Kentucky Board of Trustees in 2015-2016, the past Chairman of the Alumni Association, and is a member of the Board of Trustees of the NKU Foundation. Smith was also involved at NKU as a student leader serving in the Student Government Association as a senator, and eventually president and student regent before graduating. Smith graduated from NKU with a bachelor’s degree in political science.

Jakki Haussler (’88) is the recipient of the 2022 Outstanding Alumnus Award for enhancing the image of NKU through its successes and achievements. Haussler is the chairman of Opus Capital Management. She was the co-founder, president and CEO of Opus Capital from 1996 to 2019. In this role, she provided executive oversight, corporate strategy and led the areas of marketing and customer service, focusing on ‘focus on institutional clients. Haussler is a lawyer and CPA (inactive), with over 39 years of experience in public accounting, investment banking, venture capital and asset management. Prior to co-founding Opus Capital, Haussler was Managing Director of Capvest Venture Fund, LP; partner at Adena Ventures Fund, LP; managing director of an investment banking company; director of Blue Chip Venture Company; and mergers and acquisitions at Cincinnati Bell Inc.

Tracy Schwegmann (’95) is the recipient of the Distinguished Service Award 2022 for dedicating time, talent and effort to improving the quality of life at NKU or making her community a better place to live. Schwegmann is Director of Marketing and Property Management at Jeffrey R. Anderson Real Estate. Since 2001, Schwegmann’s portfolio has grown and his responsibilities include overseeing the management of The Banks project in downtown Cincinnati. Locally, she has also overseen the successful opening of development projects including downtown Crestview Hills and the various Rookwood properties.

In November 2021, Schwegmann was elected by the voters to the post of administrator of the canton of Sycamore, where she will serve a four-year term from January 1, 2022. She is a former chair of the board of directors of NKU Alumni and is currently a member of the board of directors of the NKU Foundation, serving on the governance / membership and real estate committees. Schwegmann graduated from NKU with a BA in Journalism and obtained her MBA from Xavier University.

McGuire (Mac) Riley (’86) is the recipient of the 2022 Distinguished Service Award for dedicating time, talent and effort to improving the quality of life at NKU or making its community a better place to live . Riley is currently President of BAHR Associates, Inc., a specialist provider of signal intelligence services to the U.S. intelligence community, and CEO of United Building Services, Inc., a versatile provider of commercial construction services. Professionally, Riley is called to the Maryland Bar and the Bar of the Supreme Court of the United States, and early in his career specialized in commercial litigation with the Howrey & Simon office in Washington, DC. President George HW Bush appointed him Special Advisor to the Air Force Department and Deputy Under Secretary of the Army. For his service in these departments, he was awarded the Civil Service Medals of Commander and Meritorious Civil Service respectively.

Riley continues to serve the NKU community on the Salmon P. Chase College of Law Visitor Council and the NKU Foundation Board of Trustees. Riley graduated as a class salutator with a Doctor of Laws, Magna Cum Laude, and Order of the Curia from Salmon P. Chase College of Law. While there, Riley was a Chase Fellow, Associate Editor of the Law Review and a member of the Mock Court National Team. As an undergraduate student, he attended Loyola College, where he received a Bachelor of Arts degree with distinction and was a Presidential Fellow, Maryland Distinguished Scholar and inducted into National Honor Societies Alpha Sigma Nu, Beta Beta Beta and Phi Alpha Theta.

John PB Jose (’15) is the recipient of the Outstanding Young Alumnus Award, which recognizes an alumnus who has graduated within the past 10 years and who has contributed through his service in improving the quality of life at NKU or in community and / or who have distinguished themselves by their professional achievements. Jose is currently the National Director of US Asia-Pacific Engagement for the Republican National Committee. Jose’s primary role is to engage with Asian communities, stakeholders and applicants across the country and to create a platform, infrastructure, support and ensure that Asian communities participate in a meaningful way. civic and participate in elections and other community engagements.

Jose was involved at NKU as a student leader by serving in the student government association as a senator, chair of university improvements and eventually chair. Jose was also a student regent before graduating in 2015. Instead of packing his bags for Washington DC as planned, Jose moved to Spain to teach English as a second language. After three years in Spain, Jose became active in the political arena, working for Senator Mitch McConnell’s re-election campaign before moving to Washington DC to work on Capitol Hill for Congressman Brett Guthrie. Jose graduated from NKU with a BA in Organizational Leadership.

Peg Adams (’86) is the recipient of the 2022 Award for Strongest Faculty / Staff Influence. Adams is the director of University Connect and Persist (UCAP) at Northern Kentucky University. Throughout his more than 30-year career at NKU, Adams has contributed to the development and implementation of student success initiatives, serving on a myriad of committees and advisory boards. Adams has held various positions in many departments including TRiO Student Support Services and the Office of First Year Programs. Additionally, she is a seasoned teacher at University 101: Orientation to College and Beyond and has taught introductory writing classes.

As the Director of UCAP, Adams oversees a number of programs that meet the academic, financial, and personal needs of students throughout their college experience, such as UCAP Textbook Lending to Steely Library, providing codes access to students with financial needs and supporting LIFT. and recipients of educational diversity scholarships. Over the years, Adams has received accolades for his work, including the Academic Affairs Outstanding Staff Member Award, the Student Affairs Jane Meier Outstanding Service Award, the Norse Advising Outstanding Partner Award, Friend of Advising, Outstanding University 101 instructor, Student Affairs Commitment to Excellence Award and Presidential Ambassador Flame Honoree. She is a proud alumnus of NKU, where she obtained her BA in English and Psychology.