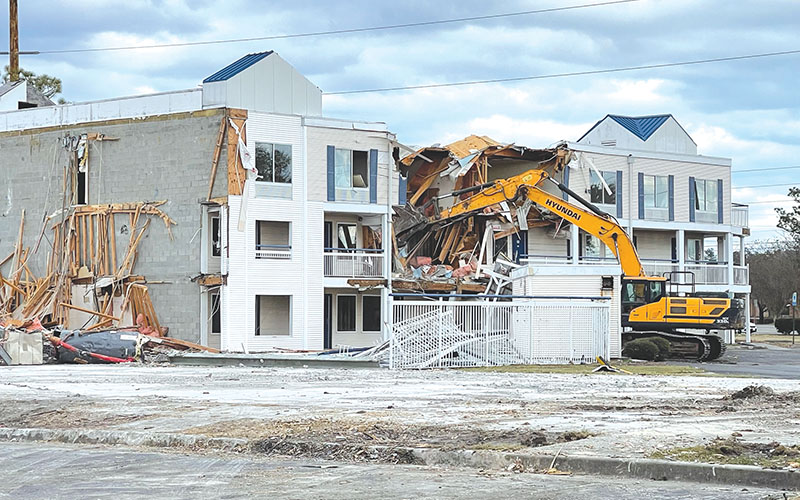 Tear down to rebuild


In December, crews tore down the 134-room Baymont by Wyndham Wilmington, which was badly damaged in Hurricane Florence in 2018 and subsequently emptied.


The now vacant property, located between an Outback Steakhouse, gas station and Mercedes dealership, is prime real estate along one of the area’s busiest corridors.


Real estate professionals say the destruction of aging commercial structures, especially along high-traffic thoroughfares, will likely become more common this year and in the future.


For Devang Patel, president of the entity that owns 306 S. College Road, starting over at the site ended up making the most sense.


“Right now it’s going to sit vacant for another year or so as we go through the planning process,” Patel said in late January. “We are currently working with several hotel brands to see which brand would be suitable for this location. We want to represent the city and build a beautiful, high-end interior hotel that accommodates long-stay or short-term guests.


Patel, whose partnership group operates two other motels in Wilmington, envisions the new five-story hotel potentially having an indoor pool, meeting space and bistro. He hired Wilmington-based 4 Seasons Demolition Inc. to do the demolition work.


“It was a smart decision after two years of back and forth to see if it was possible to fix it,” Patel said. “It made no sense to be in a prime location and have an older property. He needed a whole new look. We want to bring freshness to the neighborhood.


Other properties in major areas of the port city are on the chopping block.


Demolition of the former On the Border Mexican Grill & Cantina at the Mayfaire Community Center is scheduled to make way for a Harris Teeter Fuel Center. The restaurant, located at 1128 Military Cutoff Road, in front of the mall anchored in Harris Teeter, closed last year.


In 2018, another restaurant in the Mayfaire area, this time on an outdoor plot in downtown Mayfaire, was demolished and eventually replaced with a new building. Now, instead of a Macaroni Grill, the space is home to two tenants — First Watch, a breakfast and brunch restaurant that started serving waffles and eggs in 2020, and Buff City Soap, which opened one year later.


At 4195 Market St., an old bank may be missing. Plans include demolishing the existing structure in favor of a new Cook Out fast food restaurant.


While some national chains will reuse a building, many prefer to create their own. “These retail commercial users who have their own prototypes, they will generally tear down the buildings to build their unique store models,” said Cal Morgan, a commercial appraiser who owns Wilmington-based JC Morgan Co. use.”


The planned demolition of the old Belk-Beery Building in downtown Wilmington, a large Belk-Beery store in the 1950s before it was turned into the main branch of the New Hanover County Public Library in 1981, aroused some opposition. The change would help create a new, smaller main branch of the library as part of a major ongoing mixed-use project, currently called Project Grace. Opponents, including the Wilmington Historical Foundation, say the Belk Building, along with a former car dealership on the block, should be preserved, while supporters say tearing down both buildings is the best way to advance the downtown.


Under different circumstances, developers can reuse existing structures “like in the Soda Pop district,” Morgan said. “People are reusing some of these structures instead of tearing them down and building new ones.”


Developers Andy Hewitt and Sandy Thorpe of Parastream Development, who bought the former Coca-Cola bottling plant and other nearby buildings for $8 million, are adding manufacturing, retail and residential uses to the Soda Pop neighborhood.


Morgan said sometimes developers will reuse an existing building because of its historic nature. One example is the Gaylord Building in downtown Wilmington, which has been transformed into a coworking space operated by Common Desk, which will soon become a WeWork company.


But story and character aren’t the only reasons to reuse old structures, Morgan said. In some cases, more current regulations prohibit rebuilding the same amount of square footage if owners decide to demolish a building.


It also comes down to a simple equation.


“Now when we’re selecting sites, finding those sites where you don’t have to tear something down is almost impossible to do in the city,” Matthews said.


The former industrial building at 349 Military Cutoff Road has been demolished to make way for The Avenue, a mixed-use project valued at more than $200 million that is expected to house businesses and housing.


Matthews said: ‘We need to raze some of these older buildings which have no real economic value if we are to build new developments in line with current demand.’

The 93rd Annual Lake County Fair Is Back – Shaw Local