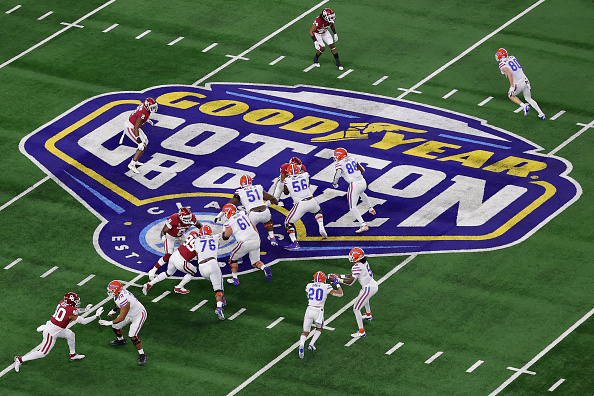 Screenings of the three bowls of the week LWOS

Changes at the top this week

After last week’s upheaval in our bowl projections, things have remained largely true for week three of the football season. Each team ranked in the top 10 won, however, some were much more impressive than others. As a result, we’re changing things up with last week’s seeding. Plus, we’re bringing a new team to the New Years Six parties. Just like we do every week, we’re starting our LWOS Three Bowls Week screenings with the playoffs.

Cotton Bowl – December 31 – (1) Alabama vs. (4) Oklahoma – For a half, business at the Crimson Tide went as usual, as they quickly took the lead over Florida. However, the second half was another story for the Gators, which made Bama look deadly and in doing so gave hope to the rest of college football. At the end, Nick Saban’s the club held on for a 31-29 victory marking their 32-game winning streak against SEC East.

Saturday’s game between Oklahoma and Nebraska tried to live up to the history of the greatest game of all time and was a lot more entertaining than everyone expected. Spencer rattler and the Sooners held off the Cornhuskers for a 23-16 victory. Due to the narrow victory and blowouts from the other two schools, we are dropping Oklahoma in fourth place.

Orange Bowl – December 31 – (2) Georgia vs. (3) Oregon – The Bulldogs had no problem in their first SEC game, beating South Carolina 40-13. They remain the two seeds this week. On the other side of the ball, the Ducks easily defeated Stony Brook 48-7. They start the Pac-12 game against Arizona on Saturday and move up to the three-seeded this week.

National College Football Championship – Jan 11 – (1) Alabama vs. (2) Georgia – Again, this might not be the most appealing game since the two schools would only have met a month before in the SEC Championship game. However, as we are in week three, they are the top two teams, although the gap may not be as big as previously thought.

Continuing our LWOS Week Three Bowl Screenings now for the New Years Six games as we mentioned earlier, we welcome a new team into the dance.

Peach Bowl – December 30 – Clemson vs. Notre Dame – The Tigers continued to struggle as they took a position on the goal line to beat Georgia Tech 14-8. Suddenly DJ Uiagalelei doesn’t look much like Heisman’s potential winner. The Fighting Irish continue to try the spell but are 3-0 after beating Purdue 27-13 on Saturday. Circle the game in two weeks when they host Cincinnati.

Fiesta Bowl – January 1 – Cincinnati vs. Penn State – Speaking of Bearcats Desmond Ridder and the company notched 15 points in the fourth quarter en route to a 38-24 route victory over Indiana. They enter as representatives of the Group of Five. James franklinThe Nittany Lions of Nittany defeated Auburn 28-20 in a whale match. They move into the New Years at the expense of Iowa. It is conceivable that three Big 10 teams would end up qualifying for playoff and selection committee games.

Rose Bowl – January 1 – Ohio State vs. UCLA – Ryan day The Buckeyes rebounded from their home loss to Oregon with a 41-20 victory over Tulsa. We would really appreciate if a team would come together and submit the Pac-12 offer to Pasadena. Even though the Bruins lost at home to Fresno State, they still get the offer since virtually every other team lost.

Sugar Bowl – January 1 – Iowa State vs. Texas A&M – The Cyclones rebounded from their loss to Iowa with a 48-3 victory over UNLV. On the other side of the ball, Zack Calzada pitched for 275 yards and three touchdowns in a 34-0 shutout against New Mexico.

Continuing with our LWOS Week Three Bowl screenings, let’s move on to the games around New Year’s Day. In case you haven’t heard the San Francisco Bowl, the old Redbox Bowl won’t be happening this year.

Citrus Bowl – January 1 – Florida vs Iowa – While they lost two points to Alabama, the Gators may have shown a way to beat the Crimson Tide. We almost put them in the Peach Bowl instead of Notre Dame, but we ended up keeping them here. As previously mentioned, the Hawkeyes leave the Fiesta Bowl and head to Orlando. The two schools have met four times in history, all in bowls games. The Gators lead the series 3-1.

Outback Bowl – January 1 – Ole Miss vs Wisconsin– Last week Kentucky was playing Tampa. However, we are moving the awesome Lane Kiffin Rebels to this location now.

Games before the new year

Duke’s Mayo Bowl- December 30- Boston College vs Kentucky- The Cats had a huge scare of the FCS Chattanooga school winning 28-23. As a result, they are giving up a few games this week.

Music City Bowl- December 30- Michigan vs Arkansas- On paper, it looks like a very interesting game. that of Sam Pittman The Razorbacks look like the real deal while Michigan definitely looks to be back.

Alamo Bowl- December 29- Texas vs USC- With the loss of UCLA, that opens the door for Trojans and almost everyone in the Pac-12 for the Rose Bowl bid. However, we are keeping the Trojans in San Antonio again this week.

Pinstripe Bowl – December 29 – Pittsburgh vs. Rutgers – Under Greg Schiano, the Scarlet Knights were a big surprise in 2021. Who would have thought Saturday’s game against Michigan would be an undefeated club battle.

Continuing with our LWOS Week Three Bowl projections, we’re now heading into the games between Christmas and New Years.

Birmingham Bowl- December 28- Air Force v Mississippi State- Due to the absence of a team from the American Conference, the Falcons enter this game.

Military Bowl – December 27 – Central Florida vs. Syracuse – Not only did the knights lose Dillon gabriel indefinitely, but likely saw their group-five chances end in a last-minute loss to Louisville.

We’re in the home stretch with our LWOS Week Three Bowl Screenings for a preview of all the pre-Christmas games.

Union Home Mortgage Bowl – December 22 – Maryland vs. Miami (Florida) – A little like Manny Diaz ‘s employment status, the Hurricanes are barely holding out for a bowl offer this week.

Myrtle Beach Bowl – December 20 – Coastal Carolina vs. Tulsa – The Chanticleers looked very impressive in a 28-25 road win over Buffalo. As a result, they retain their chances as a representative of the Group of Five.

As always, we’re wrapping up our LWOS Week Three Bowl Screenings with a preview of the start-of-season games, including seven games on December 18 alone. In fact, two of the best potential bowl games are happening this first weekend.

Cure Bowl- December 17- Appalachian State vs. Liberty- Just like last year, the Flames hope to represent the Group of Five. However, a lot should tip in their favor. As a result, fans are treated to one of the best games of the entire bowl season.

New Orleans Bowl- December 18- Louisiana Tech vs Louisiana- It’s one of the best boules games every season. These two public schools have met 87 times in history. However, they haven’t played since 2015.

Thank you for checking out our LWOS Three Bowls Week screenings. As they say every week, you don’t like where your team is positioned? Hold on, that will likely change weekly until the official pairings are released.