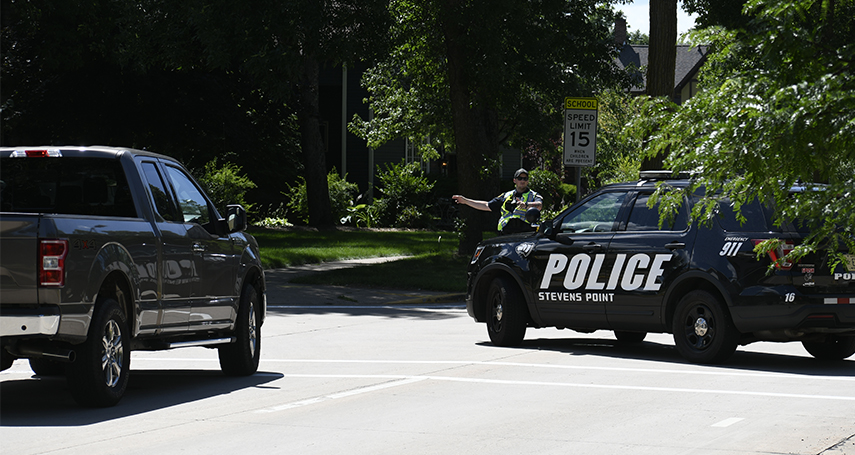 Editor’s note: where is all the information you’ve seen in those daily blotters? Everything is explained here.

Wrong license: Deputies cited a 51-year-old man for riding a motorcycle without a Class M license near Division and Jefferson streets at 6:02 a.m.

Stolen, we believe: Deputies were called to an undisclosed address in Stevens Point when a person, whose name and age were not disclosed, reported their motorbike stolen at 10.21am.

Dangerous: A caller reported to deputies at 10.52 p.m. that a gate was in the carriageway of the southbound lanes between Walmart and Porter Rd. At 10.52 p.m. No further details were released.

Hammered: Deputies were called to an undisclosed address in Amherst at 1.18pm when a caller, whose age and gender have been redacted, reported that a 37-year-old man was destroying property with a hammer.

Blockage: A caller reported at 2:39 p.m. that a large oak tree was blocking the roadway near County Hwy. Q and River Rd. Dispatchers notified the county highway department.

Immaturity: A conscript, whose gender and age have been redacted, reported to deputies the theft of a campaign sign on the highway. 54 and Grant Ave. at 2:51 p.m.

Shaken: A 62-year-old man called deputies to report he was passing a residence at a redacted location in Stevens Point at 5:49 p.m. when a vehicle in front of him pulled into a driveway and ‘sprayed’ his truck with rocks.

Speeders: A 57-year-old woman called dispatchers to report a continuing problem with speeding on the 1600 block of Country Club Rd. at 5:10 p.m. No further details were released.

Who knows: Deputies issued a citation to a motorist whose name, age and gender were redacted and for some reason not included on the blotter at 10.25pm ​​near Country Club Dr. and Main Street.

No clue: Deputies arrested a 36-year-old woman near Division St. and North Point Dr. at 10:33 p.m. for a reason that was not disclosed on the blotter.

Sibling Rivalry: An unknown person called deputies at Baymont Inn, 247 Division St. North, at 10:43 p.m. to report an argument between siblings. No further details have been released.

Guess: Deputies issued a warning for reasons not included on the blotter to a 20-year-old woman during a 2:27 p.m. traffic stop on County Hwy. J North and Butterfield Ln. in Rosholt.

Trashed: Deputies were called to a redacted address in Amherst at 3.09am when a caller, whose age and gender were also redacted, reported that someone had damaged a 2006 Pontiac. All four tires were flat, the air vents were broken, the ignition was “broken” and the radio was broken.

Clueless: Deputies issued a traffic warning for undisclosed reasons on the blotter to a 31-year-old man at the motorway. 66 and Brilowski Road. at 8:02 a.m.

Bear: A caller reported a small black bear on the loose near Currier and Cedar streets in Whiting at 8:48 a.m.

Hogs: A caller complained about a group of Harley Davidson bikers blocking traffic on I-39 and the freeway. 66 at 11 a.m. The intersection was clear when the deputy arrived.

Guess what: A caller whose age and gender were redacted called dispatchers at a redacted location in Custer at 2:18 p.m. to report that a white truck with a young motorist had a loud exhaust and was illegally dumping tires. No further details have been released.

Ghost Driver: A motorist whose age and gender were not listed on the blotter received a verbal warning for speeding near County Hwy. KK and Wester Way in Amherst at 7:19 p.m.

Incomplete: Deputies issued a warning for an unknown reason to a 27-year-old male motorist at 7.24pm near Water and Nebel streets.

Dark: Deputies issued a warning for no lights at 10:16 p.m. near Clark St. and Strongs Ave. to a motorist whose age and sex were missing from the blotter.

Who knows: Deputies issued a citation for an unknown reason to a 57-year-old man during a traffic stop at 11:06 p.m. on County Hwy. BB and county road. W

Passed out: Deputies were called to Ellis and Church Streets at 2.33am when a caller reported a man had passed out in the front yard. No further details have been released.

Assault: Police were called to Icon, 956 Main St., at 2:32 a.m. when a caller reported that a woman wearing a black sports bra and black shorts had been assaulted outside the bar. The woman was reportedly punched four times in the face. No further details have been released.

Drunk: Police were called to the Point After Pub, 801 Second St., and at 3:02 a.m. when a caller reported a man passed out in a Silver Dodge. The vehicle was still running when police arrived and the trunk was open, but no further details were released.

Orwellian: Deputies were notified at 6:43 a.m. that a longhorn steer was loose on the roadway at County Hwy. BB and Ridge Road. in Bancroft. The owner reported that they were renovating their house, and that’s how the steer came out.

No ticket: Deputies were called to Rivers Edge Campground, 3266 Campsite Dr. in Dewey, at 1.35pm when six people who refused to pay for a wristband also refused to leave. They left when the deputies arrived.

Utility: A caller reported to dispatch that a large tree had fallen to the roadway on the 400 block of West River Dr. in Linwood at 4:10 p.m. Dispatchers contacted the town president, who dispatched someone one to remove it.

Stuck: Police were called to Jimmy John’s, 1837 Park Ave. in Plover at 6:04 p.m. when a vehicle became stuck on a sidewalk. A tow truck was called.

Bad Driver: Someone reported a motorist driving “all the way” near the freeway. 10 and County Road. A at Amherst at 8:17 p.m. No further details were released.

Somewhere out there: Police were called to a redacted location in Plover at 9.39pm when a caller, whose age and gender were also redacted, reported that an ex-boyfriend was causing trouble. The man left when the police arrived.

Drunk or medically ill: Deputies were called to Two Lakes Resort, 9915 Two Lakes Rd., at 10:05 p.m. in Almond when a 43-year-old reported that a 32-year-old ‘could barely stand up’ and was sitting in his car. It was unclear whether the woman was intoxicated or had a medical condition, and the blotter did not say whether she was cited.

Nasdaq Bear Market: 3 Stellar Growth Stocks That Can Double Your Money By 2025