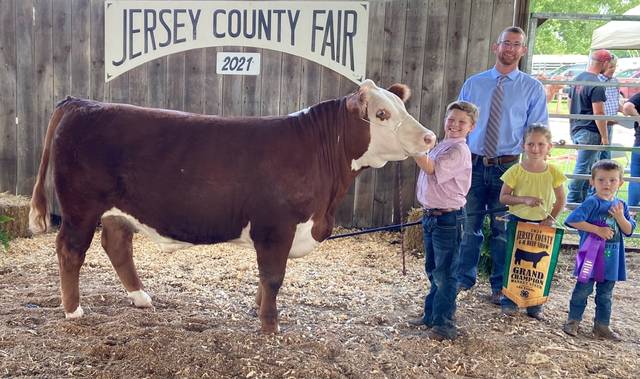 Members completed preparations for the 4-H shows by helping out with the clean-up of the fair on July 8 at the fairgrounds. The youth helped set up the cattle stalls, clean the showroom, and set up chairs for upcoming shows.

The exhibitors and their projects were judged by Jacalyn Meisner, 4-H alumnus, agriculture teacher and FFA advisor.

Another full day of shows took place on Saturday July 10. The 4-H members started very early with the Rabbit Show. Wayne Schafer judged the rabbit projects and shared a lot of information and advice with the exhibitors. Mia Wolff won the Grand Champion Rabbit. Elissabeth Walsh received the title of Showmanship Champion for rabbits in the senior division and Abel Cannon was awarded the title of Showmanship Champion in the junior division.

The 4-H General Show ended a busy day as members shared a variety of projects ranging from aerospace to woodworking and everything in between. The Best of Show awards went to: Allison Haarmann-Vegetable Gardening, Clark Blasa-Woodworking, Amelia Hines-Foods & Nutrition, Peyton Smith-Communications and Photography, Dinah Slusser-Visual Arts and Daphne Slusser-Clothing & Textiles.

On Sunday July 11, members of the kennel tested their skills in the annual Master Showmanship competition with Judge Rodney Knittel.

Bailey Wadlow received the Reserve Grand Champion in the Senior Division. The grand champion of the junior division was won by Max Poppe and Carson Beckman won the reserve.