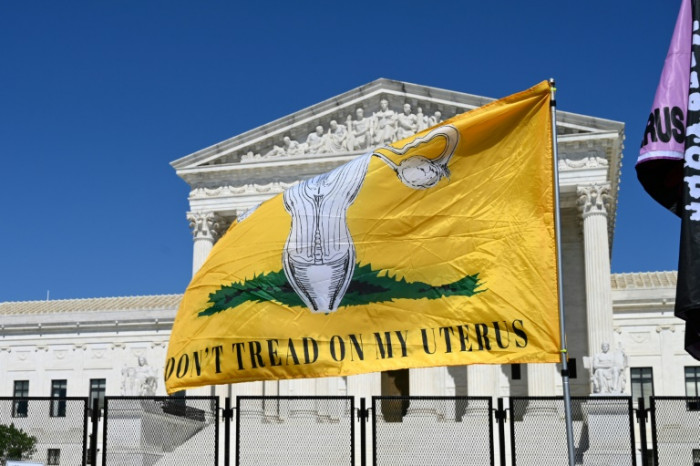 In the United States, abortion rights advocates and opponents brace for a court ruling

A flag reading “Don’t step on my womb” is displayed in front of the United States Supreme Court.

WASHINGTON: Odile Schalit is preparing for the “worst”.

Shalit is the executive director of The Brigid Alliance, an organization that helps women in the United States who are forced to travel long distances to get an abortion.

And with the Supreme Court set to potentially restrict access to abortion, her group’s services may soon be more essential than ever.

A draft opinion leaked in May would have the conservative majority on the nine-member tribunal overturning Roe v. Wade, the landmark 1973 decision authorizing nationwide abortion access.

The final decision on the highly controversial issue is expected by June 30.

In the meantime, both abortion advocates and opponents are engaged in preparations for what is being called the “post-Roe world.”

The Brigid Alliance organizes and finances trips for women wishing to have an abortion after the first trimester.

This often involves travel from states with strict abortion laws to other states.

“We’re adding more staff. We’re doing outreach,” Shalit said. “We are reaching out and trying to expand our donor base.

“We are really doubling down on all of that effort.”

The Brigid Alliance currently employs 10 full-time staff and assists some 125 women per month. He hopes to increase this number to 200 per month by adding six additional employees.

Even then, Shalit said, and despite increased donations, “we will not be able to meet the needs of every person who needs our services.”

Twenty-two of the 50 US states, mostly in the conservative South of the country, are prepared to ban abortion if the Supreme Court goes ahead and overturns Roe v. Wade.

According to the Guttmacher Institute, nine states, including Arizona and Michigan, have pre-1973 laws banning abortion on the books that they could immediately revive.

Others have so-called “trigger” laws that would go into effect virtually automatically if the Supreme Court goes ahead and restricts abortion rights.

Iowa, Georgia, Ohio and South Carolina are among the states that have passed laws restricting abortion after six weeks, before many women even know they are pregnant.

Although currently blocked by the courts, these laws could come into force if the Supreme Court changes the legal landscape.

Democratic-run states where abortion would remain legal are bracing for an influx of women seeking abortions.

Connecticut and Delaware, for example, have expanded the categories of professionals licensed to perform abortions to include nurses and midwives.

California lawmakers have allocated $152 million to facilitate access to abortion and the governor of New York has pledged $35 million.

Planned Parenthood, which performs more than a third of the 850,000 annual abortions in the United States, is expanding its network in places like Colorado and Illinois, which border states where the procedure may be banned.

Ordinary citizens are also mobilizing – and have been for some time.

Since May 2019, the online discussion platform Reddit has hosted a group called the “Aunties” which offers assistance and anonymity to women wishing to have an abortion.

A retired woman in her 60s in Tennessee was among those who offered to help on Reddit, saying she could drive abortion seekers to neighboring states.

At the same time, she said she would rather volunteers “consider connecting with pre-existing organizations like ours, to build on what already exists.”

Abortion opponents have opened their own “emergency pregnancy centres” in recent years, where they seek to persuade women wishing to have an abortion not to have the procedure.

Abortion pills, which account for about half of abortions in the United States, are another battleground.

Readily available on the internet from overseas sites, the pills can be used without significant risk for up to 10 weeks of pregnancy.

Several conservative US states, including Kentucky and South Dakota, have sought to cut off access to the pills by banning their mail delivery.