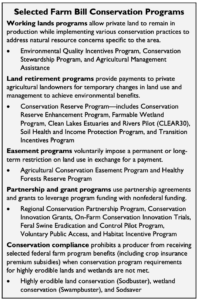 “From 1985, farm bills have widened the conservation program to include addressing multiple natural resource issues. Although the number of conservation programs has increased and techniques for solving resource problems continue to emerge, the basic approach has remained unchanged: provide financial and technical assistance to implement conservation systems supported by education and research programs.

“As Congress begins the process of authorizing the next farm bill, possible areas of interest in the title of conservation may include funding for programs, climate strategies for the agricultural sector, back unfunded applications, compliance provisions, and program flexibility.”

Last month’s report noted that “the conservation title is one of the most important non-nutritional titles in the Farm Bill, representing 7% of the total projected farm bill cost for 2018, Where $60 billion of the total of $867 billion in 10 years mandatory funding it authorized (FY2019-FY2028). Expenditures for agricultural conservation programs in general increased from $2.3 billion in FISCAL YEAR 2002 at over $5 billion in total spending on FY2020. Annual spending beyond the expiration of the 2018 Farm Bill (fiscal year 2023) should cap above $6 billion (Figure 1, below), assuming that the programs reauthorized without change.”

And in an update to the 2022 agriculture sector earnings forecast on Friday, the USDA Economic Research Service pointed out that “Conservation payments financial assistance programs from the USDA Farm Service Agency (FSA) and the Natural Resources Conservation Service (NRCS) should be $4.2 billion in 2022, up 7.3% from 2021.

With this brief history in mind, the House Agriculture Subcommittee on Conservation and Forestry held a hearing last week titled “A 2022 Review of Farm Bill Conservation Programs.”

“Most panels Republican members pushed Ducheneaux and Cosby to explain environmental and economic issues connections between signing up for federally funded conservation programs and fighting climate change, while Democratic members widely asked how the two agencies could use the proposed $29 billion in conservation funding in the Build Back Better [BBB] Invoice.”

Eggert added that “members found common ground, however, in expressing the need to reduce bureaucracy in agencies for streamline the disbursement of funds and staffing at local agencies.

And DTN writer Todd Neeley reported last week that “While the Build Back Better Act remains stalled in Congress, the top Republican on the House Agriculture Committee was questioned on Wednesday. whether the USDA would be willing to distribute what a dramatic increase in conservation funds would be if the bill were eventually passed.

The DTN article stated that “the [BBB] the legislation calls for a $27.1 billion increase for USDA conservation programs over 10 years. Among conservation details, a provision in the bill would pay farmers $25 per acre to grow cover crops.”

“Cosby said his department would be ready if more federal conservation funds were made available,” the DTN article said.

Neeley added that, “Rep. Abigail Spanberger, D-Va., Subcommittee Chair [opening statement], credited the NRCS for its work on climate-smart agriculture. She also called on her companion Members of the House will follow the example of the Senate and pass the Climate Solutions Growth Act. The bill, which would establish a carbon credit certification program at the USDA, passed the Senate 92-8 last summer. Spanberger noted that the bill is supported by a long list of agricultural groups, some environmental groups and Fortune 500 companies.