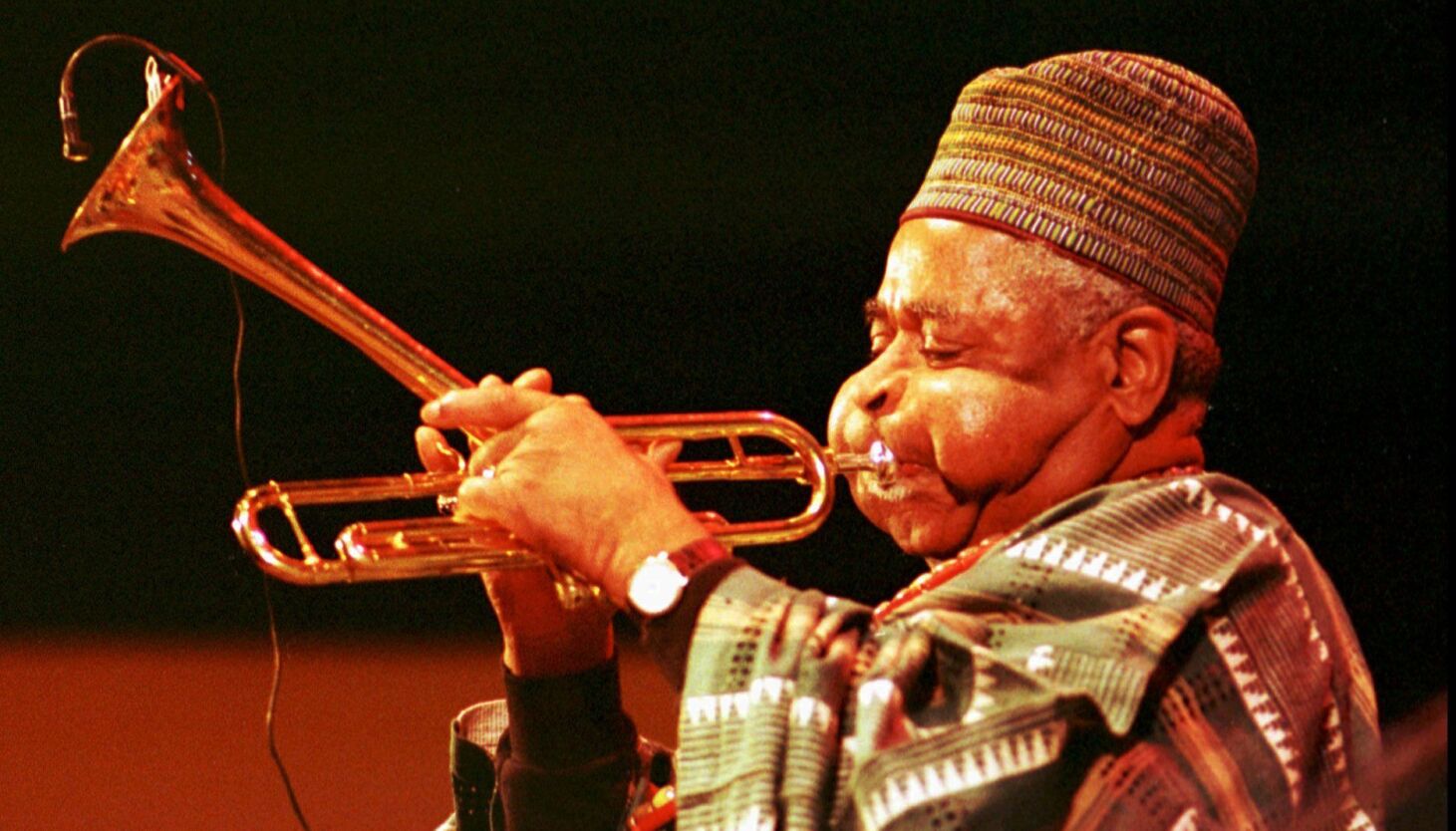 Dizzy Gillespie cut a royal figure walking through O’Hare: his black and red fez like a crown, his green raincoat draped over his shoulders like a cape.

It was in 1988. Dizzy arrived from Paris. My job was to meet him at the airport, fly to Peoria together, interview the jazz legend, and catch his performance that night. He brought nothing so square as a change of clothes. Just an instrument case containing his famous bent horn. And a small satchel containing papers, vitamins and medicine for his diabetes.

If name be unknown — time erases greatest fame — Dizzy Gillespie was the archetypal jazzman. His personal look – sunglasses, soul patch, beret – has become the cliché of a bee-bop hipster.

The musician had come a long way – 4,300 miles, Paris to New York by supersonic Concorde, New York to Chicago by jet, now a propeller plane to the city known as the place where all that daring won’t play. He was 71 years old. It had been blowing its horn for half a century. Why go to all the trouble for another gig?

“I want to play all the time,” he replied. “You have problems if you lay off. There’s an old saying among classic jazz guys: “If I don’t play one day, I know it.” If I don’t play two days, my compatriots know it. If I don’t play three days, the whole world knows it.’ ”

“You have problems if you lay off.” Something to keep in mind as the Chicago Jazz Festival is going full steam ahead this weekend for the first time in three years — last year it was a one-night showcase. I imagine more than a few people have a little trouble with the idea of ​​going to downtown Chicago just for some good free jazz. Perhaps out of practice by the COVID lull, perhaps interrupted by the violence that has spilled out of parts of the city where Chicago has grown accustomed, shamefully, to letting the violence linger on forever.

This fear is not so much based on reality – crime in Chicago has been much worse – as triggered by the city’s unrelenting shame that passes for social commentary. Victims of prejudice tend to unwittingly absorb the values ​​of their oppressors. To repel, consider the source. There’s been a lot of flutter around Republican gubernatorial hopeful Darren Bailey repeatedly calling Chicago a “hellhole” — at this point, it’s almost a tic. You’d think it’s not coming from the guy who views Donald Trump’s endorsement as something he can be proud of. A measure that is broken cannot be the measure of anything.

In a city like Chicago, good is always wrapped up in bad, and vice versa. It’s a complete risk and reward package. One cannot accept the dynamism of a city without the problems that flow from it.

How do you think Chicago got jazz in the first place? We may not be the birthplace, but we were the midwife that caught jazz emerging in the world and gave it a good slap in the face. Virulent racism in the South has caused music to flee to Chicago, swept away by the hearts, fingers and lips of those who created it. Jazz, like the blues, came from black America, and black America came to Chicago because it offered freedom, relatively, or at least improved possibilities. Kinder, softer racism.

Exactly 100 years ago this summer, King Joe Oliver sent his famous telegram to his second horn, Louis Armstrong, to come to Chicago, where he could earn in a day what he was paid in a week in New York. Orleans.

Gillespie, Armstrong… another factor that might keep people away from Jazz Fest is the lack of big names. At the risk of projecting my own flaws onto the general population, I believe that people go to concerts in part to get stars under their belt. If Wynton Marsalis was playing Jazz Fest this year, I wouldn’t need to goad the people downtown. Magnus Broo may be everything trumpeter Dizzy Gillespie was, or more, but it’s not the same thing.

What I’ve found is that anyone who’s good enough to be on the program puts on a great show. When my wife and I went there in 2019, we had no intention of seeing Joel Ross, “America’s most exciting new vibraphonist”. But there he was, doing magic. If he had been the reincarnation of Milt Jackson, I would have gone there intentionally and felt richly rewarded.

Armed Forces Bank named “Distinguished Bank of the Year” for 11 of the past 12 years; Also awarded the “Military Designation for Savings Excellence”