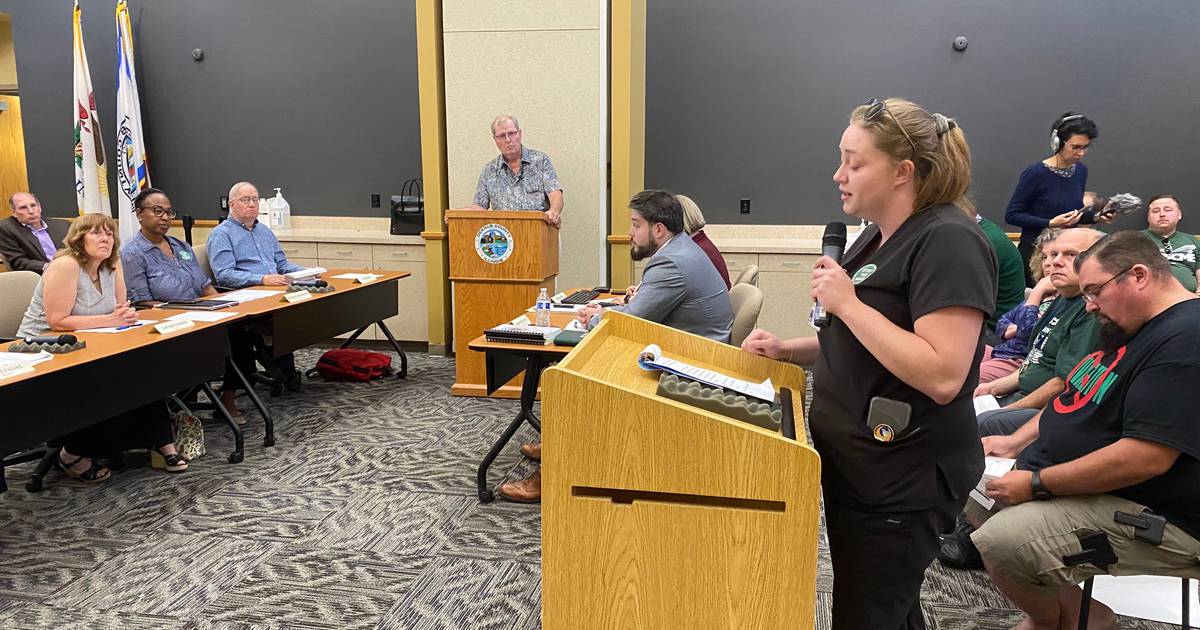 SYCAMORE – The DeKalb County Council is set to determine the direction for the future of the struggling DeKalb County Nursing and Rehabilitation Center, as residents showed up this week to support a possible referendum.

DeKalb County Council has received two offers to buy the county-owned facility, which finds itself more than $7 million in debt due to what officials said was unrealized mismanagement, billing overdue and a decline in the number of residents. The two purchase offers – one for $8.1 million and another for $8.3 million – will be voted on by the full board on Wednesday.

A sale would have to be approved by a two-thirds majority vote of DeKalb County Council.

Another option is also available to elected officials: a chance to ask voters to enter the debate.

“The nursing home is really a fiscal entity and there has been good progress,” said Maggie Niemi, the center’s administrator who took over last fall. “More could be accomplished if given more time.”

The council will also decide whether or not to place a referendum on the November 8 ballot, which would ask voters to consider backing a property tax. The annual tax would levy up to 0.1% to help the nursing center budget. If approved by voters, the county council would be allowed to levy an annual amount – which could vary from year to year, but would be capped at 0.1%.

A potential sale would not rule out a referendum, however, county officials confirmed this week. If the council decides to go ahead with a sale, the referendum – if approved next week – would remain on the ballot, but could be considered moot if ownership of the nursing home changes .

Midway through its fiscal year, county staff said it expects the retirement home to fall short of its budgeted revenue by about $5.3 million in 2022.

The county council will take all three votes – two takeover bids and a referendum – at its July 20 meeting. If an offer to purchase is accepted, a one-month due diligence period would be required and the county council could decide to walk away, according to the documents. A referendum would not approve a tax levy, but rather put the question to taxpayers in November.

A supported referendum would not necessarily mean a levy would go ahead, however. And this isn’t the first time the DeKalb County Council has tried to shore up the nursing center’s finances with property taxes. Four months ago, as the debt debate raged at the county level over the facility, the county council offered – and then declined – to hold a referendum on the June primary ballot. In 1991, DeKalb County voters passed a referendum that authorized the county government to levy taxes for the retirement home each year for 30 years. This tax was never levied, according to documents.

It was a familiar sight at Wednesday’s special full committee meeting in Sycamore, as nursing center employees and members of the American Federation of State, County and Municipal Employees No. 3537 made picketing to oppose a sale. The union represents over 200 county employees of the nursing home, government offices and the health department, about 2/3 of the members work at the nursing home.

Chuck Coulter, who works maintenance at DCRNC and is president of the union, said staff are doing everything they can to keep the nonprofit facility under county ownership. In an interview ahead of the meeting, Coulter said he believed if the nursing center was privatized it would not benefit residents as it is now.

“For-profit medicine is an evil this world doesn’t need, and that’s what we’re looking at right now by selling to these two companies that currently sit on the board – Saba and Illuminate,” said said Coulter, who lives in Sycamore.

“That’s not what we want in our county,” Coulter said. “Every time you invite into the scourge of the earth, you get exactly that, and that’s what for-profit medicine is all about.”

County Council Chairman John Frieders said it was important for county leaders to remember that the nursing home’s tax issues were impacting the county government’s overall budget. The county government also oversees the budgets of the DeKalb County Sheriff’s Office, the Health Department, and the county jail, among others.

“It’s all part of the county,” Frieders said. “And the nursing home has a huge impact on the budget, like all the other departments.”

Hannah Williams, the facility’s nurse supervisor and DeKalb resident, expressed concern about the federal Medicaid and Medical ratings given to Saba Healthcare and Illuminate HC, according to data released by the U.S. Centers for Medicare and Medicaid Services. .

“If that’s their specific experience in specialty care settings, I don’t want to be part of that,” Willams said.

Moshe Blonder of Saba Healthcare addressed the board on Wednesday and said his company owns and operates eight skilled nursing facilities in Illinois.

“We’re not perfect, but we really strive to do our best every day,” Blonder said.

Williams also reminded the board that they had been invited to tour the center.

“As a county, we need to work with each other, not against each other,” Williams said. “It’s not something a handful of people can solve on their own, and talking about the numbers isn’t enough.

Carolyn Morris, alderwoman for Ward 1 in the Town of DeKalb, urged council to move forward with the referendum.

“Make it an option, give the community that choice,” Morris said.

Morris said that as an economist, she likes the idea of ​​having a public retirement home because the motives are different from a for-profit business.

“There are a lot of for-profit strategies that we think don’t work well when we have the wrong incentives,” Morris said.

During the referendum discussion, County Councilman Scott Campbell – who, along with fellow councilman Bill Cummings, proposed an alternative plan to scale the facility over five years, primarily through staff cuts by attrition – called for the referendum to be placed before the full board for approval next week.

After the meeting, Coulter said he was glad Campbell said what he had done about the referendum.

“I know they’re elected to be the voice of the voters, but in a matter like this, less than thirty people speaking for an entire county doesn’t seem fair,” Coulter said.